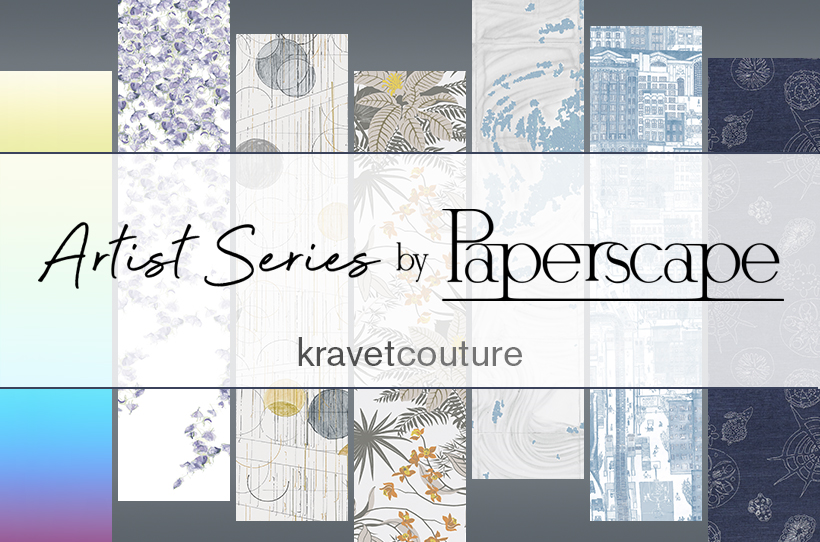 Kravet Couture introduces the Artist Series by Paperscape, a collection of unique wallcovering in collaboration with seven intriguing artists. Bridging the world of art and home furnishings together, this collection presents a striking assemblage of abstract and contemporary art to act as a canvas in an interior. Meet the incredible artists behind the designs!

Assume vivid astro focus (avaf) was founded by Eli Sudbrack (b. Rio de Janeiro, Brazil, 1968) in 2001. avaf occasionally morphs into a duo with Paris-based artist Christophe Hamaide Pierson (b. Paris, 1973) and or into a collective, depending on the different projects they are involved in. Sudbrack lives and works between New York and São Paulo. Eli Sudbrack says “With FIRST DRAFT, I wanted to depart from the digital feel that I was known for and started working on wallpapers that had a more handmade vibe.”

Judy Chicago is an artist, author of fourteen books, educator, and humanist whose work and life are models for an enlarged definition of art, an expanded role for the artist, and women’s rights to freedom of expression.

Chicago is most well-known for her role in creating a Feminist art and art education program in California during the early 1970’s and for her monumental installation, The Dinner Party, 1979, now permanently installed at the Brooklyn Museum. In her wallcovering titled MORNING/EVENING, Chicago says, “The design and color are inspired by the vibrant skies in New Mexico where I live. To create the signature fades that were translated into the wallpaper designs, I used a spray technique that I learned in auto body school in the 1960’s to apply layers of paint to canvas.”

Michele Oka Doner is an internationally renowned artist and author whose work spans five decades. Her artwork is fueled by a lifelong study and appreciation of the natural world, from which she derives her formal vocabulary. Her artistic production encompasses sculpture, public art, prints, drawings, functional objects, artist books, costume and set design, video and other media. She maintains a studio in New York City. TELESCOPIC is inspired by a familiar landscape. “I know the beach like the back of my hand, the different seaweeds and algaes, the corals and shell fragments as well,” says Doner. “The translation into paper with a repeat pattern was a simple and natural act for these beautiful shapes and forms.”

Evan Robarts was born in Miami Beach, FL, and is currently based in Miami, FL. He received his BFA from Pratt Institute in sculpture in 2008. His work explores urban development, transformations, and environmental changes. He has held solo exhibitions at Berthold Pott, Cologne, Germany; Bryce Wolkowitz Gallery, New York, USA; and Galerie Jeanroch Dard, Brussels, Belgium. “The focus of REARRANGEMENTS is always the brushstroke, where it takes you and how it becomes more than the application of paint onto a picture plane,” says Robarts. “I liked the idea of doing wallpaper because there are many moments in my paintings where the brushstroke transforms into a wave of water or gust of wind.”

The paintings, drawings and prints of Michael Rich reflect an approach to nature and landscape as a wellspring for spiritual investigation and meditation through the contemporary language of gestural abstraction. Rich used his artistic approach when creating FALLING GINGKO, “My drawings are not done from observation but rather from memory and often include an element of invention,” says Rich. “I think of these drawings as ‘abstract botanicals.’ I started with autumn when the leaves are a brilliant yellow and cover the ground in a delicate carpet surrounding the tree. As the seasons change, so do my drawings.” With an awareness of the opposing elements of nature’s serenity and tenacity, Rich investigates the harmony and irascibility of the natural world through opacity and translucency of color. Michael Rich lives and works in Providence, RI and Nantucket MA and is a Professor and Chair of Visual Arts at Roger Williams University, Bristol, Rhode Island.

Brazilian born, U.S. based designer Gaspar Saldanha is renowned for his textiles. After studying Fine Arts and Industrial Design in Rio de Janeiro, he moved to New York City to specialize in textile design at the Fashion Institute of Technology, later working for leading fashion brands such as Anne Klein and Calvin Klein. Saldanha says, “Growing up on a small island in the Guanabara Bay in Rio de Janeiro, I was surrounded by tropical vegetation which became a constant theme in my early textile designs.” This tropical vegetation can be seen in ORQUIDEA. In the early nineties, Saldanha established his eponymous fashion brand, producing a line of menswear sold at prestigious stores such as Barneys and Bergdorf Goodman. Over the next 25 years, he worked at fashion brands, such as Halston Mens and Kenneth Cole.

Fred Simon creates large scale, very detailed urban landscape drawings on paper using colored pencil and just a bit of oil pastel. A self-taught artist, Simon has been drawing his entire life, but it wasn’t until his mid-20’s that he got his first studio and decided to dedicate as much of his time as he could to creating this work. His work has been shown everywhere from galleries to community spaces, to storefront windows, and has been sold to private collectors. Simon’s design, URBAN PLANNING, “is meant to remind people of certain places they have been or experienced, without actually being any particular location that a person can nail down,” says Simon.